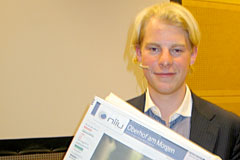 Focus on day two of the IfraExpo in Vienna moved predictably from heavy metal to digital print as a couple of German youngsters launched a new concept which may have a part in the future of newspaper publishing, writes Peter Coleman.

But while the day belonged to Wanja Oberhof (picturd) of Berlin start-up InterTi and its supplier partner Océ, it finished with Kodak reporting on two digital inkjet newspaper print sites, while Agfa bowed out of that particular game after admitting its digital print “experiment” in Portugal had been uncompetitive.

Oberhof and his partner Hendrik Tiedemann are the young guns behind the 'Niiu' personalised publishing concept, launched today (see GXpress August and online) with its first issue scheduled for November 16.

The two had shared, separately, the dream of a newspaper which met all of their individual needs and interests, and have worked to set up a new business model which brings print and the internet together in a “best of both worlds” digital print product.

Subscribers register their content choices from a mix of regional, national and international newspapers, and add in selected personal internet content. The resulting 'personalised' newspaper is printed digitally and delivered to their door the following morning.

Simple huh? Getting the idea together took the duo two years of hard work coordinating delivery, content, software and print technology partnerships. Getting through to a decisionmaker at major German publisher Axel Springer took 30-odd telephone calls, and led to a list of objections to their scheme. But Oberhof and Tiedemann were soon back with the answers … and once Springer agreed to give the concept a try, others were easier to persuade.

Oberhof says he learned as a student that individually-address invoices could be handled by newspaper deliverers, so why not personalised newspapers? And research in Germany and Switzerland led to a software company (Previon) which could handle the complexity and immensity of the data processing task.

Digital print is the enabling technology and ItnerTi is working with Océ service provider RT Digital, which will print the 24-page newspaper - up to 5000 copies daily - on a Jetstream 2200 inkjet web

The concept has already won the approval of advertisers, one of which will pitch different perfumes in its range to each identifiable demographic group. Content provider partners will be paid according to the pages selected, in what Oberhof says is a lucrative contract.

Will it work? Watch this space… and expect to see InterTi take the idea around the world directly and through licensees if it's a success.

Later today, Kodak brought trade press representatives together to tell them about installations of their Versamark VL4200 inkjet which are being used to print newspapers in Malta and Italy.

Among internaional newspapers being printed by Miller Newsprint - which is a shareholder in London contract newspaper printer Newsfax International - is the 'Sydney Morning Herald'. And another VL4200 user, Rotomail is to print 'USA Today' editions for airport outlets in locations including Milan and Rome, nder an agreement with distributor Messaggerie Internazionale.

And at its press conference, Agfa Graphics' Marc Op de Beeck said the Dotrix digital print system installed at a newspaper distributor in Portugal is coming out: “While the technical results were very positive, the business model was not so good,” he says.

At the same event, Agfa announced a 300 plates per hour, troller loaded version of its Advantage N CTP system, as well as new Arkitex versions including a Portal collaboration component designed specifically for newspapers.
• More Ifra vendor news at www.gxpress.net and in our November issue.

The rapid pace of innovation and adaption in the newspaper industry was evident Tuesday at IfraExpo, where a session on newsroom strategies examined multimedia integration, social media tools and other emerging trends.

Though much of the change is technologically driven, the human component in editorial decision making remains a key strength of newspapers and should not be underestimated in the quest for “the next big thing,” several of the speakers said.  “Be on all platforms, but keep in mind that technology isn't everything,” said Tatiana Repkova, director of research and information management for WAN-Ifra. “What is really necessary is the human brain, so don't let technology interfere with your common sense and professional intuition.”

While print newspaper circulation continues to grow world-wide – up 1.3 per cent in 2008 and 8.8 per cent over five years, according to WAN-Ifra’s World Press Trends report – the long-term decline of circulation in many mature markets has sparked newspaper innovation on digital platforms, extending their reach.

On display Tuesday at the Focus Session on Strategies in Newsrooms were several of the emerging trends that hold potential for profit:

- Joachim Blum, a media consultant working with WAN-Ifra, unveiled the goLocal initiative, a partnership between Newsplex and the German Press Agency dpa that helps local and regional publishers make the most of their unique market position. “We want to show how hyper-local journalism will work, and how you can even increase the number of newspapers you produce,” he said. For more on the project, go to http://www.ifra.net/community/editorial.

- Ms Repkova, who presented an overview of print and digital press trends,
focused on new market opportunities that are producing revenues for newspapers: products like catalogues and entertainment websites; databases that are useful to readers; magazine supplements that support multimedia destination websites; and more.

- Pascal Zemp, the project manager for new media for Switzerland-based Ringier, said the group's Blick publications sent 11 reporters to cover an event in Turkey, without any of them knowing the others were there. That lack of coordination is a thing of the past: he presented a case study on Blick's multimedia integration strategy. “The workflow was optimised for print, with online and mobile providing mostly recycled information,” he said. “Even the thinking of most journalists is in print workflow. We wanted to move toward a workflow that is more reader friendly, a story-centric workflow.”

- Meg Picard, the head of social media development for Guardian News and Media in the UK, showed how social media tools can be used to build communities that contribute to newspaper development. “We have an expression: 'embrace, don't replace.'

If people like Twitter or Facebook, and like spending time there, then it's crazy to say, 'stop using Twitter or Facebook and come to the Guardian!' We need to be there as well.”  Among other examples, Ms Picard showed how The Guardian asked its users to go through some 400,000 documents related to a Parliament expense scandal and recommend those that were interesting and needed further investigation. Some 14,000 users worked through them.  “Social media doesn't have to be complicated,” she said. “It is about communicating, and this is something journalists and media organisations do really well. They provide new tools for communication. It can be comments at the bottom of an article. It can be new ways to e-mail. It can be polls.”