Peter Coleman: News is something you don’t always expect 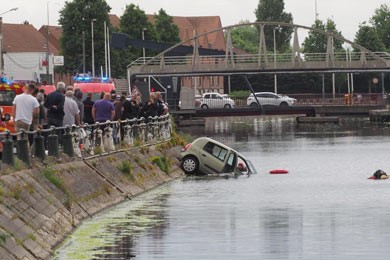 Some cynics – and I’m occasionally among them – say journalism is something that happens where journalists are. So here’s an admission: I missed the shot.

I’m navigating my elderly cruising yacht along a canal in northern France when, hélas, a woman drives into the canal beside me. And I mean literally beside me.

It’s like, “is this really happening, did I see what I just thought I saw?”

And yes, I did. My wife and I were near to the start of a bucket-list trip through the French canals, having crossed La Manche from England and dropped the vessel’s mast.

We were up early to catch the entry into the Calais marine lock, across a couple more of what the French call ecluses, one thick with weed, all the time accompanied by the young blonde woman provided by navigation authority the VNF to open bridges ahead of us…

And then this happens.

You’ve seen TV dramas in which cars – this was a little green Citroen hatchback which had turned from a side-street – hurtle into the water, and then sink slowly below the surface.

This was a different kind of tragedy, before our eyes; we even saw the 60-something woman reaching to rescue her shopping bag before it got wet. Apparently she had had a heart attack.

But no, there was no opportunity or place for heroics on our part – two gendarmes were on the scene almost immediately, and waved us on – and rushing on I didn’t think to get a picture! The priority was to reopen the road-bridge ahead, which had been opened for us and two other cruisers who had already passed through, so that fire and ambulance could get to the scene. We opened the throttle and gunned the boat through.

We heard later from the very helpful VNF woman, that half a dozen police had worked to pull the car to the side and smash a window to get the driver out. She was blue with cold, and all including the police, ended up in the local hospital. “She survived,” we were told.

So could we have done more, lasso wing mirrors with a mooring rope perhaps, to stop the hatchback going down so fast? Apparently not. Perhaps rescuers thought a couple of old yachties, who don’t – it must be admitted – speak a huge lot of French, might be more of a liability.

Anyway, here’s the story, courtesy of regional paper Nord Littoral, and the pictures I failed to get!