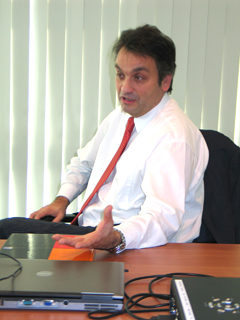 Agfa Graphics has signed a new manufacturing and research partnership with Punch Graphix, extending a relationship which predates the acquisition of Strobbe – developer of its flatbed CTP base – by the OEM specialist. President Stefaan Vanhooren says that while the three-year contract includes “let out” clauses, the arrangement has worked well and he expects it to continue to do so, as the company looks for other ways to “disinvest”. The philosophy has seen the closure of Agfa’s former Compugraphic plant in Wilmington, USA, in favour of OEM supply by “better competitors”. Punch – which competes in the digital printing market through Xeikon – makes the Polaris CTP system Agfa sells to newspaper users and recently cooperated on research and development for the new Advantage platesetter. Elements developed by either partner are co-owned, Vanhooren says, “but the differentiators, we keep in our company”. In Australia to visit user (and competitor) sites, discuss strategies, and “support the business”, the president and board member said the company took intellectual property “very seriously’ and was vigorously defending its technology rights. In the case of printing plates, this has seen court action to freeze the stocks of a competitor accused of copying its technology. An hour-long media briefing at Agfa Graphics office in Rydalmere, NSW, saw Vanhooren cover a range of other topics including: • separation of the divisions within the Agfa group – there is “absolutely no synergy” now between health and graphics markets, he says and separation will come, “sooner or later”; • the economic situation – Vanhooren is pessimistic about how long a recession might last, but says Agfa is prepared, with ongoing cost-cutting programmes; • market competition – he claims the company leads the prepress market in Oceania, but admits there is work to do to strengthen its position in Asia and North America; • the continuing transition from analogue company – where it was protected by the high cost of entry to some markets – to digital, where investment continues in CTP. In its Oceania region, Agfa Graphics looks back on a year in which plate prices rose as a result of a spike in aluminium costs, but which included sales successes such as a CTP switch at some APN sites and the continuing rollout at News Limited.
Sections: Print business